Tower muqarnas sheathed with mogharnas / muqarnas. Multi-story elements are repeated (stacked) three times. Each stacking element is rotated 22.5° relative to the ones above and below. Displays mirror symmetry (MS), including 2-fold MS, 4-fold MS, and 8-fold MS. the 22.5° rotation of stacked elements implies a hidden 16-fold symmetry.

My mogharnas 3D tile set is derived from the 32-fold division of the circle and contains 16 distinct elements. (See Mogharnas Seed, right image.) Many of my muqarnas compositions use all 16 3D ’tiles’. This one uses only 14 of the 16 unique tiles. 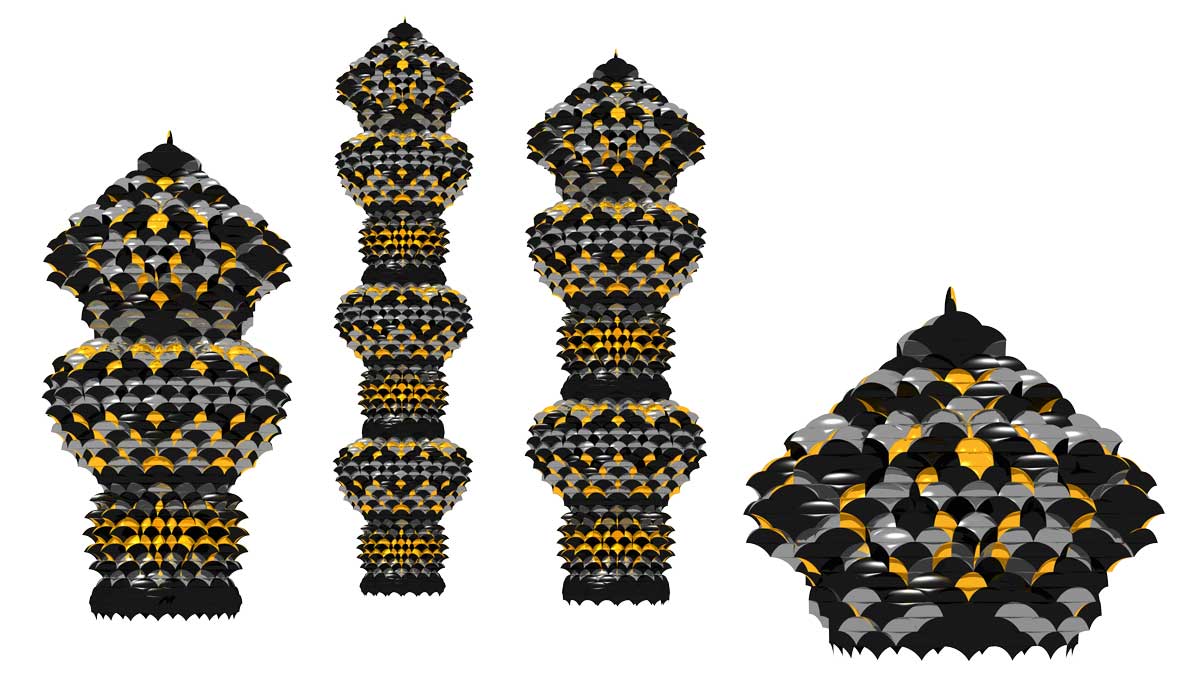 Stacking Potential of the Tower Muqarnas 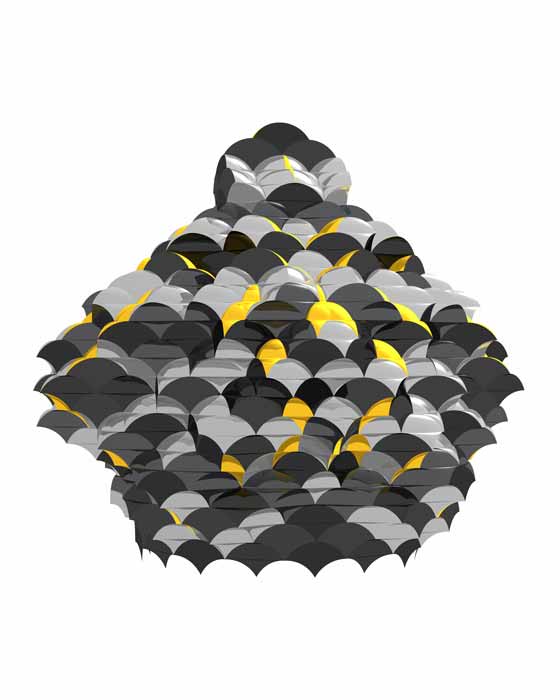 Top (or Crown) of the Tower Muqarnas 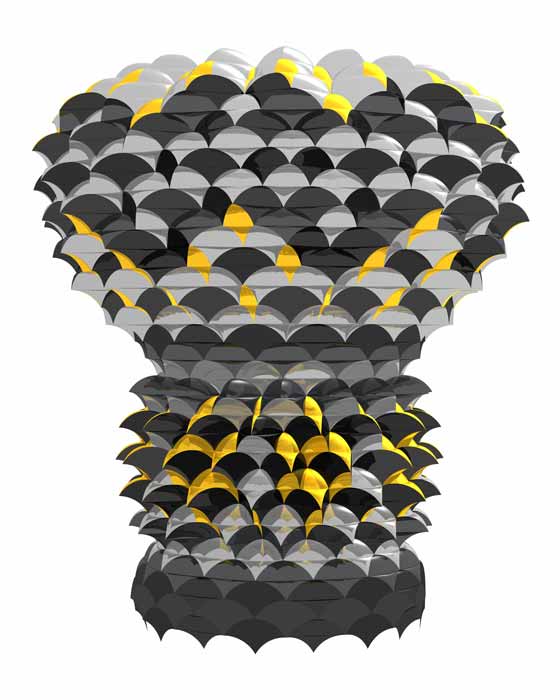 Segment A of the Tower Muqarnas 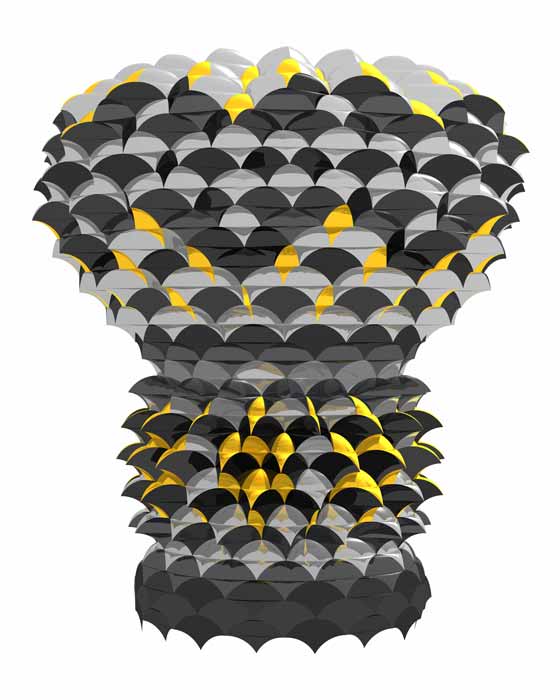 Segment B of the Tower Muqarnas

The muqarnas seed for this form is 1-15 X2. See image below. Its top or crown uses all except the four muqarnas tiles, #2, #6, #10, & #14. The stacking element uses all but two the muqarnas tiles, #2 & #6. In the development of other mogharnas forms one or more strict rules were used to determine muqarnas tile or muqarnas motif placement. Here I made decisions about tile placement based upon aesthetic criteria supported by geometric integrity.

For more information on muqarnas seeds please see this page of my site. 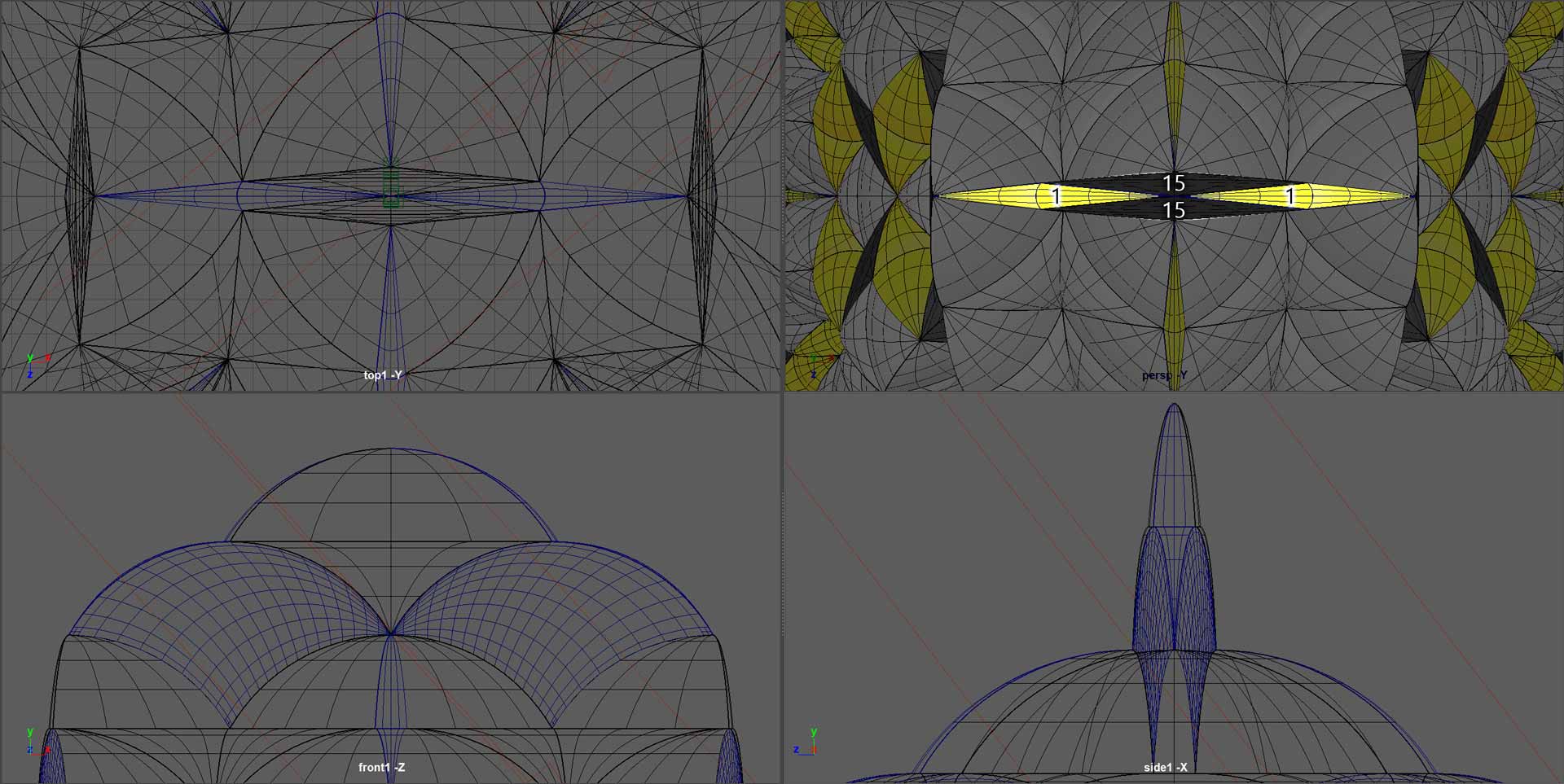 Views of the Muqarnas Seed of the Tower Muqarnas 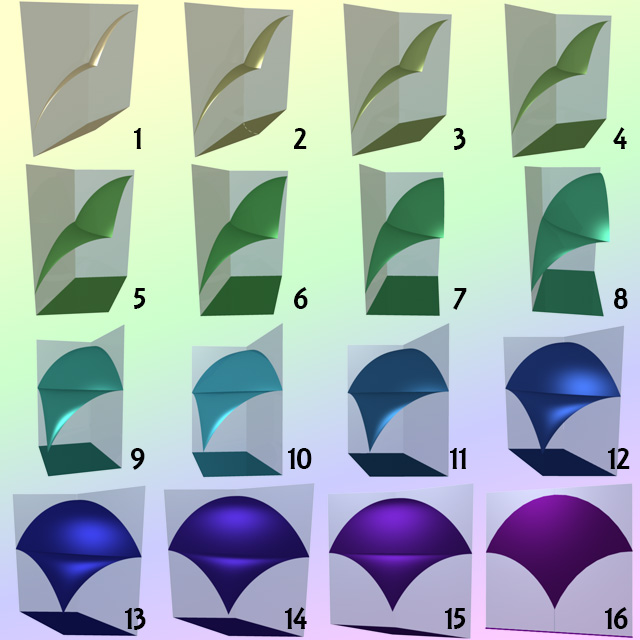 For this tower form I made a series of arbitrary choices that seemed right. Along the way some of those choices forced me to back out in order to get closer to an unrealized and unknown form. See image below. The form (below left) was too predictable, too regular and led nowhere but to an ever larger umbrella shape. So I ditched it. This is an example of my reasons for tearing out part of the nascent shape(s) on the way to a final form, which was unrelated to much of the geometry along the way. It is rather like sketching something unseen and is initially approached by what it isn’t. Each time one throws away some of what it isn’t, the true form begins to be known.

As shown by example below, many of these choices required removing much work while chasing various spatial ideas. What began as an idea for a muqarnas interpretation of a straight roofline went through various re-conceptions before finally emerging as tower sheathed in muqarnas made of a stacking element crowned with a top. Muqarnas make poor followers (they rarely do what you want). Equally, muqarnas are difficult to follow. They would probably be much better behaved under under someone with much greater math skills than myself.

The most difficult part was making the lower element stackable. I have tried on various other occasions to make columns out of muqarnas, without success. I can only attribute solving the problem here to blind luck. Rotating when stacking was the key in the proverbial lock. It’s rather like Blake in his Proverbs of Hell, “If the fool would persist in his folly he would become wise.” 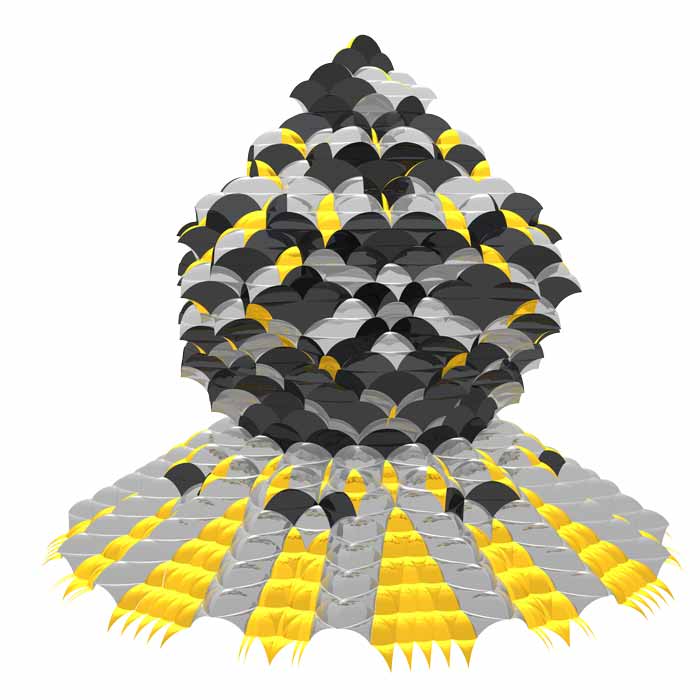 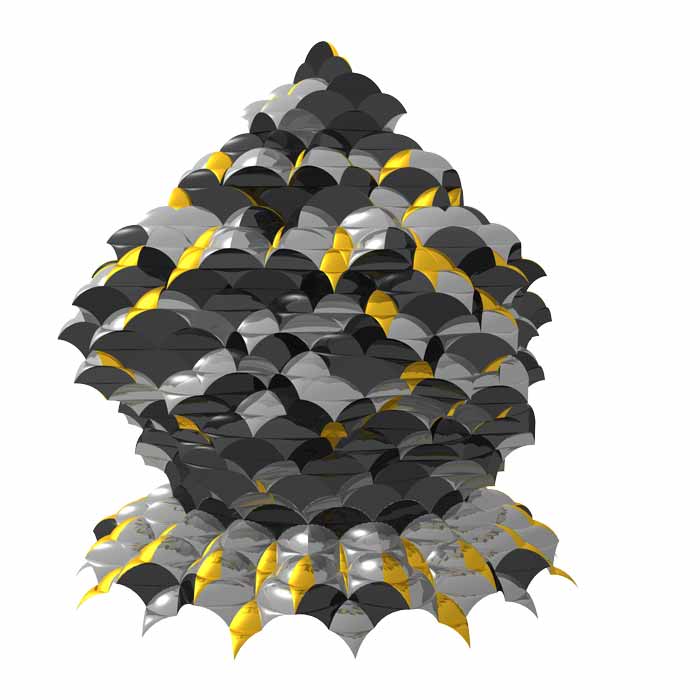 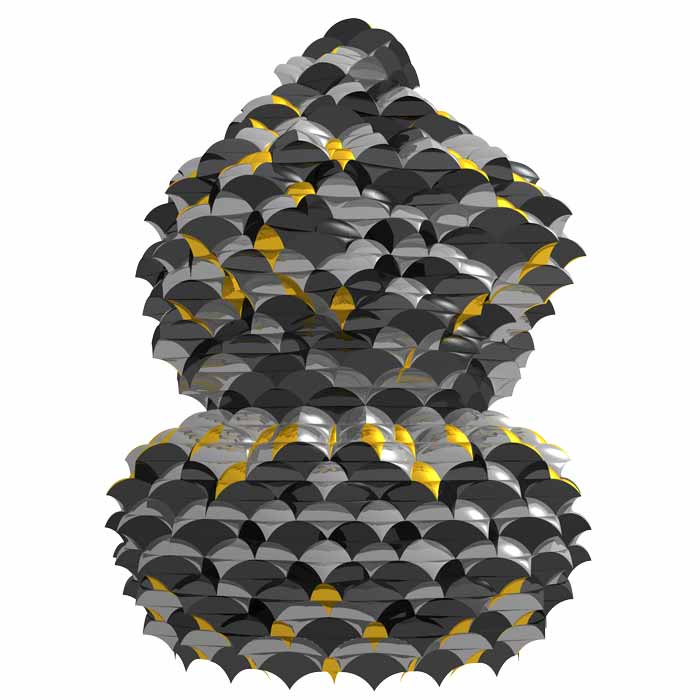 As a final note, I make no claim to be a sculptor, or any kind of artist. Nonetheless I have created sculpture in a variety of media with a variety of techniques. Please see examples here. I am familiar with additive and subtractive approaches. This mogharnas composition utilizes both the additive and subtractive approaches. When I went too far in a direction it resulted in waste which had to be removed.

Below is an earlier, smaller barrel shaped muqarnas form..

Thank you, Phil, for your material help in this project. 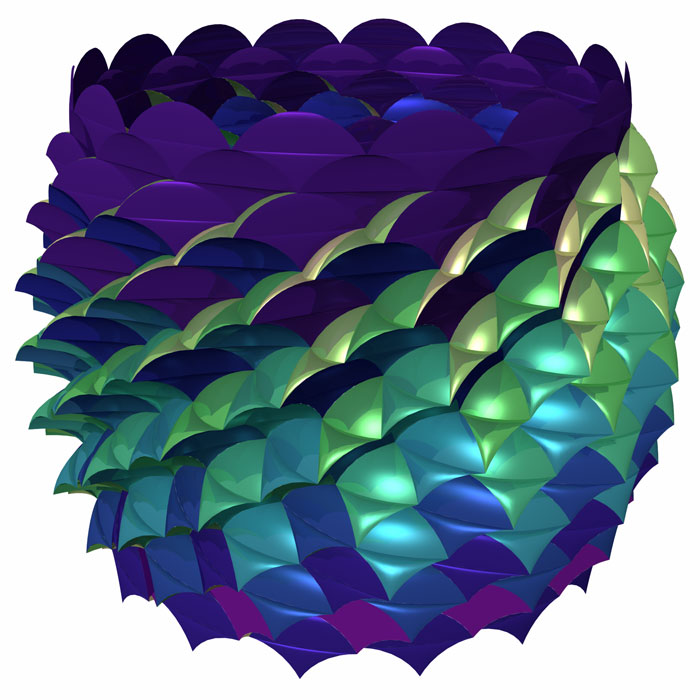