Using the Geometry of the Rhombic Triacontahedron

Prior to learning about and beginning to explore muqarnas I was interested in the regular space enclosing properties of mathematical solids. Above is a recent effort.

The Rhombic Triacontahedron provides both the diamond shapes (rhombs) and 3-dimensional geometry. used to define this space enclosing system. One distinct advantage of this system is that all rhombs identical. Thus it would simplify manufacturing and reduce material costs.

Since this approach is filled with the Golden proportion (see below) it may also be fundamentally pleasing to the eye. For example, the diagonals of the faces are in the Golden Proportion.

The similarity to this example of Penrose tiling, from the Wikipedia article of the same name, is obvious. (image credit) The 3D version has the advantage of using only a single face, while the 2D Penrose tiling uses two basic types of tiles. Also, because of its zonahedral symmetry the rhombic triacontahedron, by the simple process of extrusion, can add more belts (zones) of golden rhombs at will. This further enhances its design potential. 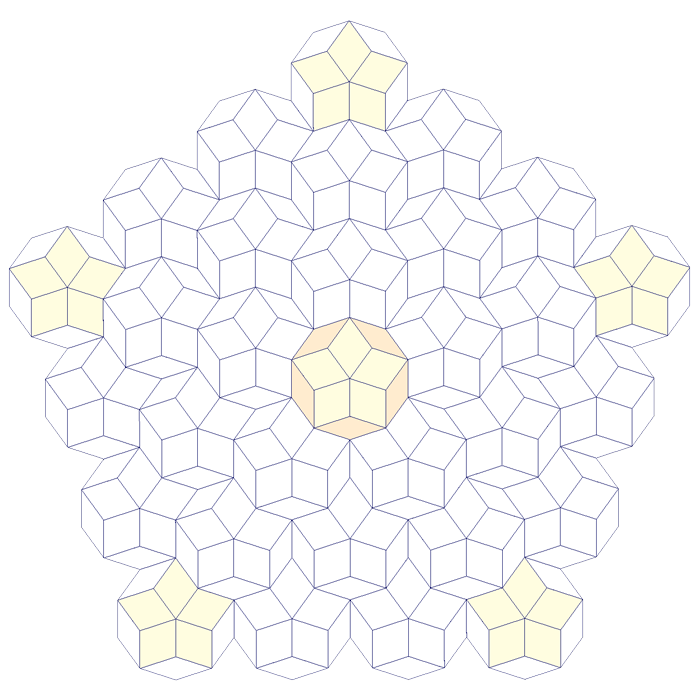 The orange group in the center and yellow groups are raised by one edge length vertically. In the plan view this is represented by outer points and edges of the colored regions. This is possible because of the zonahedral symmetry of the rhombic triacontahedron.

Diagram of Penrose Tiles from Wikipedia 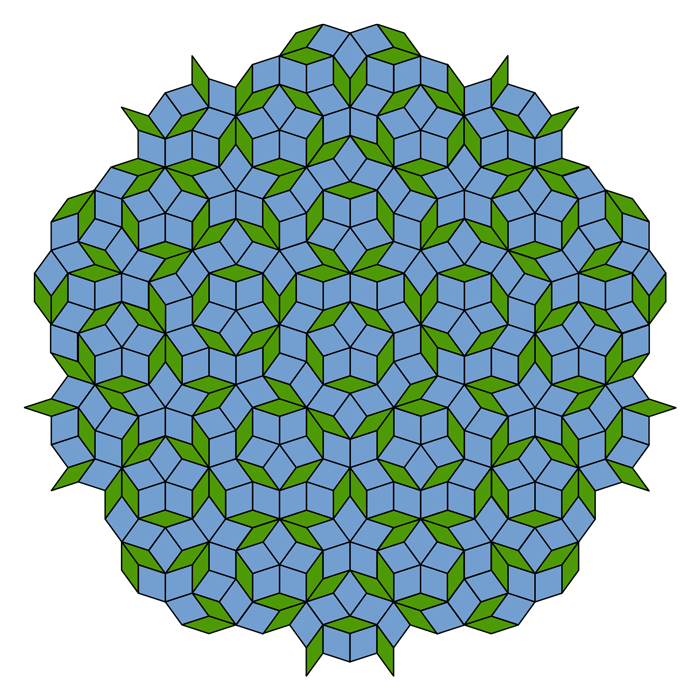 With thin and wide rhombic tiles. 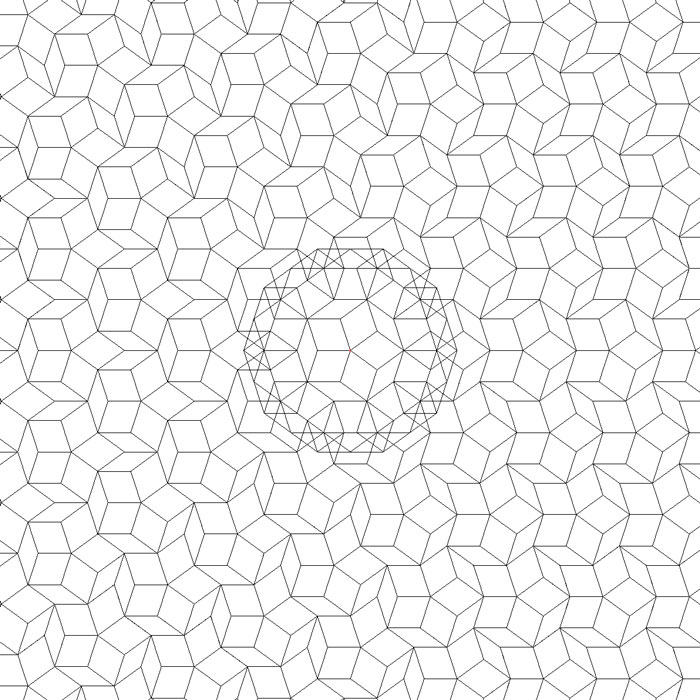 The central tower is not simply an extrusion of zonahedral symmetry. Instead it must be carefully built since the use of the inherent symmetry becomes quite complex, Looking at the plan view is of no use in understanding the tower structure. 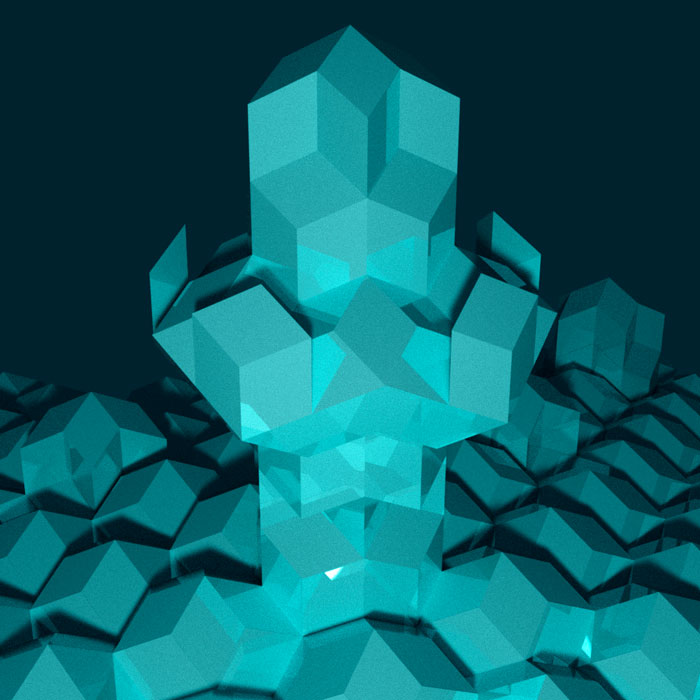 Elements of the tower structure are counterintuitive and were slow going in resolving.

The images below are based on hidden line removal plotter output which I ‘shaded’ in photoshop later. 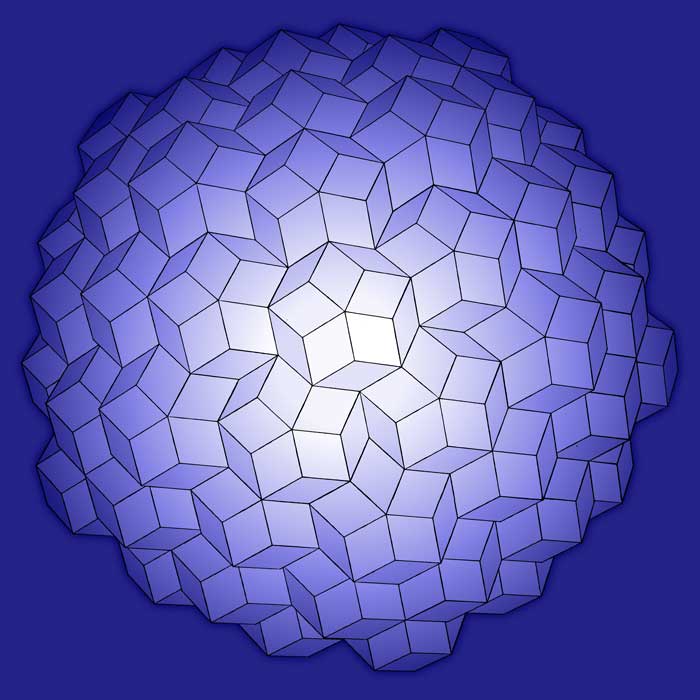 A Golden Diamond dome expanded to three tiers with the ‘Simple‘ method. 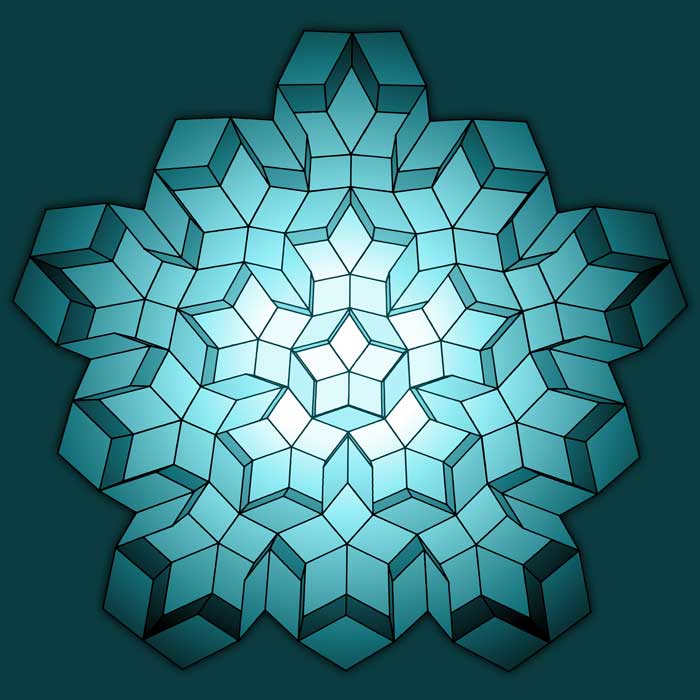 A Golden Diamond dome expanded to two tiers with the ‘Star‘ method. Viewed from below. 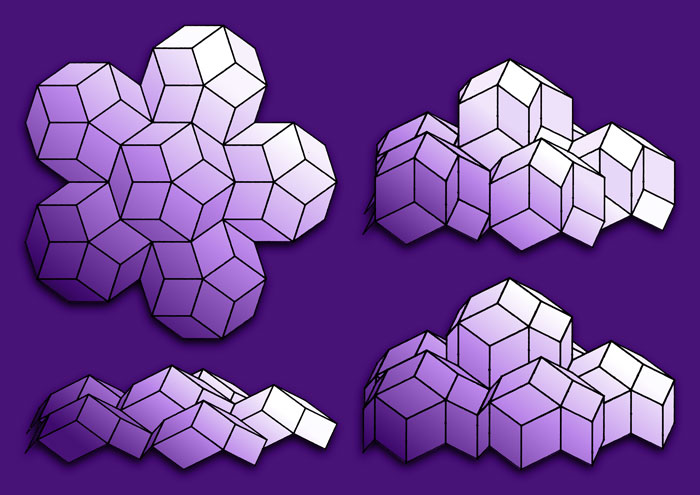 Here are three basic methods for adding tiers to create domes with the Golden Diamond system. All three approaches share the same plan view (upper left). On the upper right is the ‘Star‘ method. In the lower left is the ‘Simple‘ method, while the ‘Full‘ Method in in the lower right.

The Rhombic Triacontahedron & Its Angular Properties 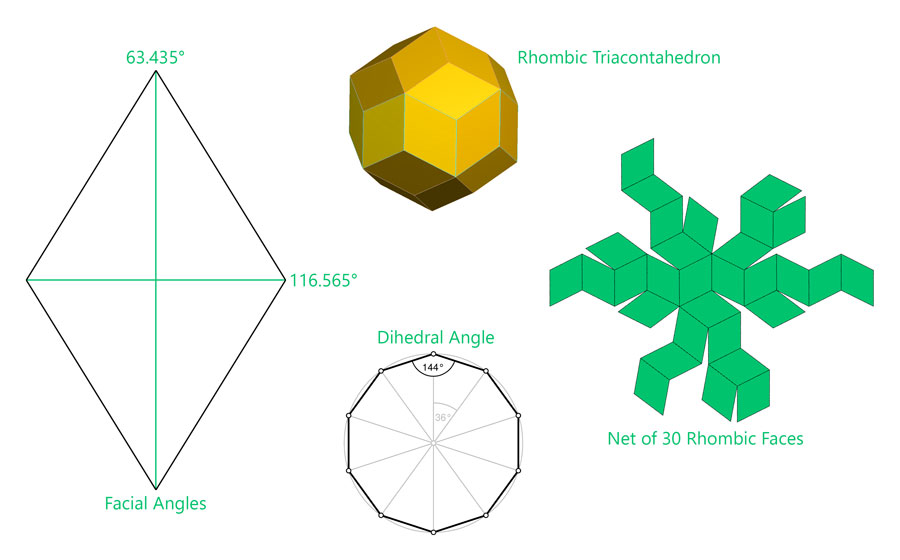 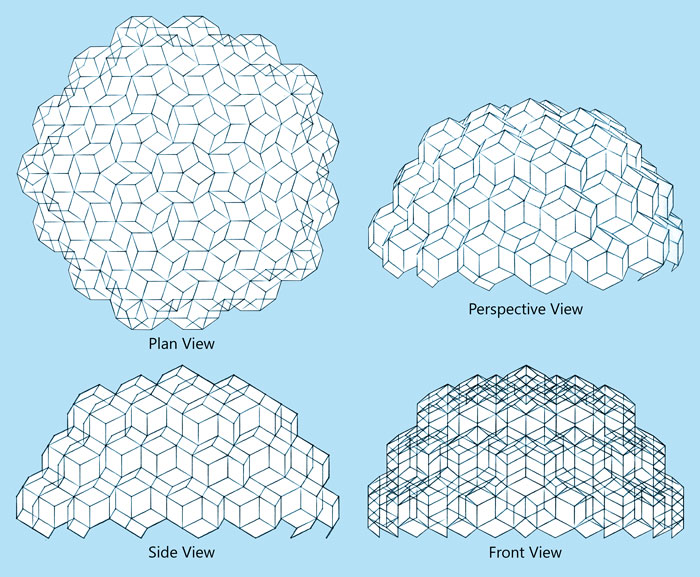 This slightly more complex Golden Diamond dome uses the ‘Simple’ and the ‘Full’ methods. The bottom two tiers also include the ‘Full+’ method, which contains additional downward facing rhombs. This is simply one example of how different methods may be combined to provide more flexibility and variety than offered by each individual method.

Also, there are additional methods. Consider the edge length as unity (1). For example visualize the ‘Star’ translated down a unit rather than up. Another would be outer lower belt of rhombs in the ‘Full’ method translated up a unit from the current position. There more methods that are still regular and symmetrical in the plan view. 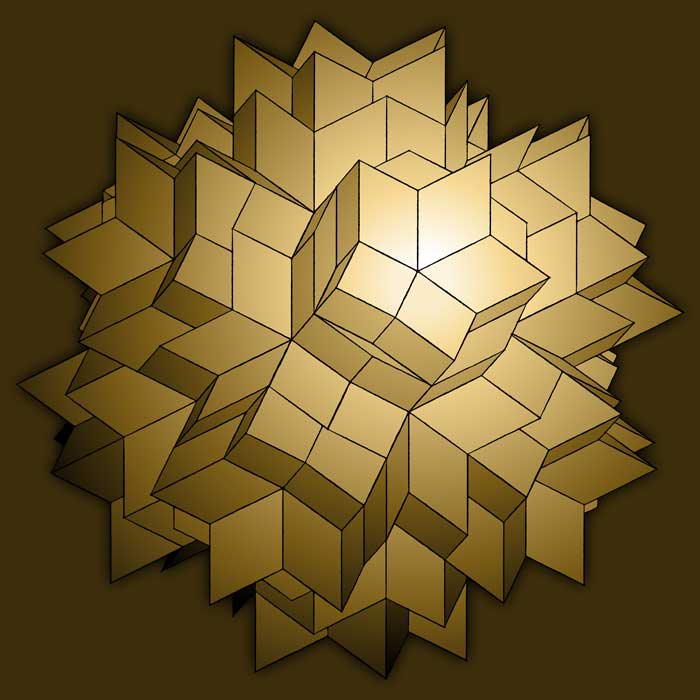