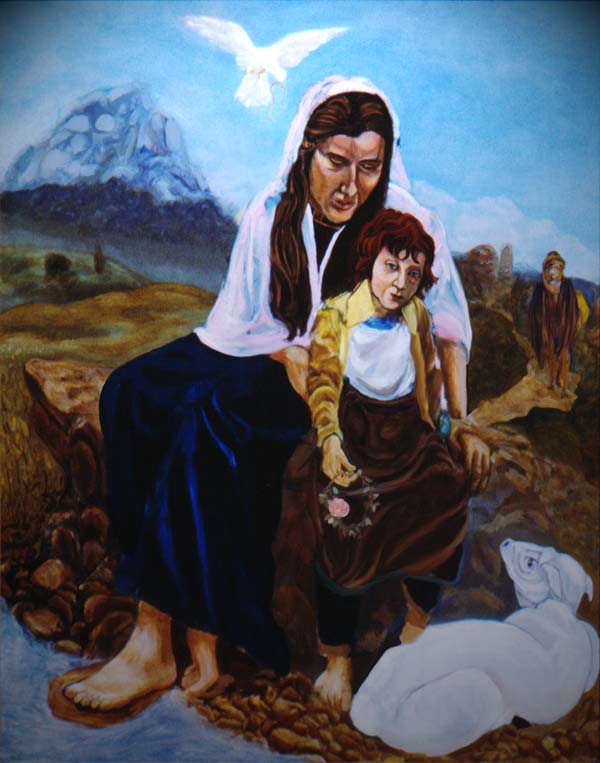 1974 Vision. Firstly, I accept wholeheartedly that this is a second or third rate painting. That has nothing to do with its significance to me or why I include it on my site. If you have the interest, you can understand why by reading below. When I painted this I was interested in the ‘mother and child’ work of the American Impressionist Mary Cassatt, for example, her The Child’s Bath. A young woman with a small boy had agreed to model for me with her child at the Millikin University painting studio. I had previously done a monoprint of them. Incidentally, she was a single mother who had the child out of wedlock. This evening, for some reason, was very different. I arranged them in a pyramidal composition. The boy was very quiet and cooperative.

The Experience While Painting

Start of the Vision

Shortly after composing the pair and returning to the easel the vision began. If I knew of a more accurate term I would use it. The vision affected my perception of my body, my sense of space and location, and gave me a conviction of being watched while I worked. Consequently, it was rather other worldly. Most importantly, the vision told me of a crucial event in the life of Mary and Jesus. It is both real and symbolic.

As I began to paint the mother and child the vision started. My body felt like a sail with a gentle breeze, which blew through me. This was accompanied by a very calm, serene feeling. Next, the space of the studio seemed to change dramatically, if invisibly, as the ceiling seemed to lift away both vertically and horizontally becoming a large arena. Simultaneously, the Host were there watching with interest, again invisibly. Finally, I am very aware of how this sounds, but a desire to make an honest record of it compels me to attempt to be as accurate as possible.

Essence of the Vision

As work on the painting progressed the essence of the vision became clear. It concerned a foretelling or vision that Mary had concerning her child, Jesus. The setting was a place in a meadow of ancient Israel while they sat on a rock. Jesus had just plucked a branch of a rose bush with a single bloom and twisted it into a circular shape. In doing so one of the thorns of the rose pricked the forefinger of his right hand. As a result, a large drop of blood swelled up on his finger.

Now, Mary looked down and saw the blood and the rose branch shaped like circle that had caused the bleeding. At that moment, Mary knew Jesus’s fate. This knowledge shook her to her foundations. Immediately, all of her maternal instincts demanded for her to flee with Jesus and Joseph to help their son escape his terrible fate. A moment and an eternity later she knew what she must do. Christ’s mother had to act as if she did not know what would happen to him. It was necessary to carry that terrible knowledge through Christ’s childhood and youth, knowing beyond a certainty what his end would be. In short, such was her sacrifice and her burden.

Analysis of the Painting

The Dove
The Dove is carrying a piece of dried grass in the shape of the Greek letter Omega, Ω, which points to the end of Christ’s life. This represents the ‘letter and word’ of Mary’s vision.

Christ
Christ, who is a central part of this painting and vision, played a curious role. At no time in the vision was the mind or thought(s) of Christ part of it. That is, unless it is Christ who was consciously telling Mary of his mortal end. The Dove argues against that interpretation. Furthermore, although Mary’s portrait was done during the vision/initial painting, it was quite different with Jesus. The initial portrait of Christ appeared to be a forty or fifty yea-old dwarf. I painted Jesus’s face a second time and he appeared to be a twenty-five or thirty year-old man. My third attempt is what you see.

Joseph
Joseph is coming on the right and was to be the first person from which Mary had to hide her foreknowledge of Jesus’s end. Joseph’s position is also a measure of how quickly Mary absorbed this terrible news and accepted her vow of silence.

The Sheep
Obviously, the sheep represents the flock of Christ’s believers.

The Rock
Shortly after this painting, at another university, SIU, working on an MFA, I blacksmithed to create my own wood and stone sculpting chisels and mallets. The rock Jesus and Mary are sitting on always reminds me of an anvil. What Mary was shown must have struck her like the blow of a blacksmith’s hammer, changing and forming her character permanently. More likely it is the ‘Rock of Our Salvation’.

There appears to be a wheat field on the left, a large mountain behind and a tower in the distance between Joseph and Mary. I don’t see any meaning in them, like the water at the feet of the Madonna and Child. None of the colors appear to me to be symbolic with the exception of the white of the dove and the sheep.

Other Visions of Christ and Fate of the Painting

Other Visions of Christ

Christ in the Heavens
Prior to the painting of Christ and Mary I had a vision of Christ. The evening before I had spent drinking with a friend. She and I slept on a flat piece of roof outside my room in a group house. In the morning while she continued to sleep I woke up and looked at her. As I looked at her face it grew suddenly younger until it was that of a very young child or infant glowing gently from within.

Next, I was aware of Christ in the sky. He was not literally in the sky, but he was above me in the empyrean, which was a deeper, purer blue. Christ was in a white robe that shone like a brilliant cloud lit in bright sunlight. Christ’s face, hair, beard, hands and feet had a fierce gleam like a golden solar fire. There was no other message than the sight of him.

The Crucifixion in a Dream
I’m not sure when or where I had my third vision of Christ, if you can call it that. It took place in a dream.

I was in the air above and away from the Crucifixion. There were two brilliant white cumulus clouds, one on either side of the Cross. I was told the clouds were all the witnesses of the Christ’s sacrifice and that I was one of them.

For many years I took this large painting with me as I moved around the country. Finally, when I was living in a village of 150 on the Skagit River in the Cascade Mountains of Washington State I gave it to a good neighbor. Fred Dillinger was a Liberty Freewill Baptist preacher and hung the painting in his church. I say ‘was’ because he probably died decades ago. I searched for the church online and suspect it is no longer active. From this I conclude that the painting has been abandoned or destroyed intentionally or unintentionally.

Years later, I showed a print of the painting to my Presbyterian minister and explained the vision to her. Clearly, that was a huge mistake. I think she thought I was insane, which is quite true, insofar as I am a well-adjusted individual who has the bipolar neurological disorder and who takes my meds religiously. Finally, as a result of this and a natural caution, I ceased talking about this painting or the accompanying vision.

I am a Christian. I haven’t attended church for almost ten years. Most recently I was a member of the First Presbyterian Church in Carbondale, Illinois. I may still be on the rolls, I’m not sure. The importance of Mary in the painting may give the impression that I am a Catholic. I have never been a Catholic and was raised as a First Methodist.

As a Presbyterian I was a member of the choir for several years. Annually we performed a Christmas Cantata with a local Lutheran church. On one occasion we sang Let All Mortal Flesh Keep Silence. An unseen angel came down and sang above us.