Try changing the width of your browser window and notice the changes to the images on the sides, top, and bottom. This Paleolithic Border Image displays the design potential of the CSS Border Image property.

"Cave art, generally, the numerous paintings and engravings found in European caves and shelters dating back to the Ice Age (Upper Paleolithic), roughly between 40,000 and 14,000 years ago. See also rock art."

"The first painted cave acknowledged as being Paleolithic, meaning from the Stone Age, was Altamira in Spain. The art discovered there was deemed by experts to be the work of modern humans (Homo sapiens). Most examples of cave art have been found in France and in Spain, but a few are also known in Portugal, England, Italy, Romania, Germany, and Russia. The total number of known decorated sites is about 400." Encyclopaedia Britannica

I am using the ‘border-image’ CSS Backgrounds and Borders Module Level 3 property. It has a Candidate Recommendation. I hope it is endorsed by the committee. It has great design potential.

This is the image I designed and used for the border image. 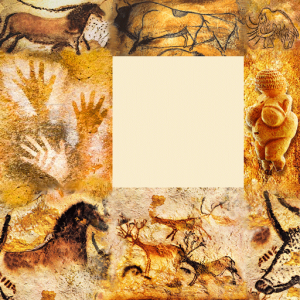