Tusk Front Poem Tusk Back Original Poem Experience Drawing Technical Issues Other Drawings
This 1984 Walrus Ivory Sculpture took about six weeks to execute, including the preparatory drawing. It also prompted one of my earliest poems of which there are now more than 400. 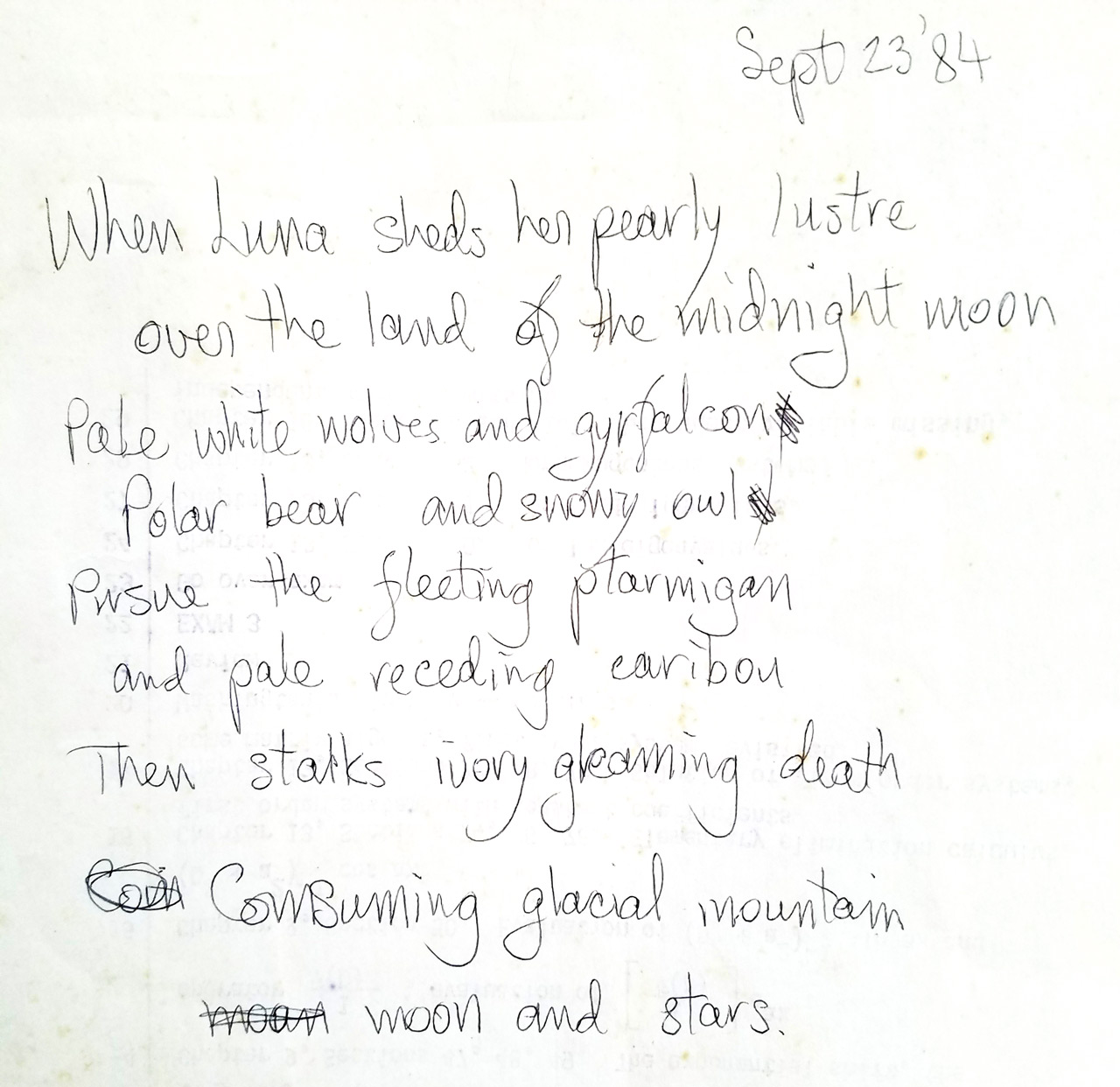 The night I finished this piece, I packed it in a shipping box that I had built specifically to hold only it so none of the fine detail would be damaged. However, before packing it I tried an experiment. First of all I placed the tusk on its stand on a table about 5 feet from a wall and also turned out the lights. Then I lit a candle and held it so the shadow of the sculpture was cast against the wall, resulting in a much larger shadow than sculpture.

Moving the candle back and forth yeilded an uncanny effect. As a result the shadows of the three dimensional animals moved relative to themselves and to each other. Consequently they distinctly appeared to be vigorously alive and, for all the world, stampeding. We are little removed from those people who created the many breathtakingly beautiful cave paintings. What did they and their peoples experience inside those caves gazing at those paintings? Finally, what I experienced that night was nothing less than a paleolithic self-initiation. Believe it or not, I don’t care. I know what happened in those caves because it happened to me in a dark room one night.

Certainly most of the preparatory drawing was realized in the sculpture. The exception is the mountain lion which became a bald eagle along with a few other details. The drawing also shows the reverse side through the sculpture in red with two walruses, the head of the caribou (blue) and an arctic fox.

From the root of the tusk to its tip the animals are a procession from those of the air to land and then water. For those with and interest in the fourth element, fire, it is in them all.

Walrus ivory is a unique material with two primary layers. These layers contain powerful stresses that are at right angles. Consequently, if too much of the top of a tusk’s arch is removed, then the inner ‘tapioca’ layer pulls to flatten the arch removing much of its aesthetic appeal. Therefore, when one designs a new walrus ivory sculpture, care must be taken to use a trestle bridge design which transmits the forces in such a way as to preserve as much of the arch as possible. For example, the tree branch visible on the back view by the eagle serves as a brace to preserve the wide end of the tusk’s arch.

The green line indicates the curvature of the unsculpted tusk.
The overlay of the sculpted tusk shows the amount of flattening which resulted from the release of stresses in the tusk.

This is the preparatory drawing for another walrus ivory sculpture. As you can see the curvature of the unsculpted tusk is much less. These drawings were never intended to be finished works in themselves..

This preparatory drawing was for my final walrus ivory sculpture, which was never executed. I intended for it to be entirely composed of birds, as you can see. My buyer asked, “Where is the polar bear? Where is the walrus” I suddenly and finally realized the box I was in with him. Obviously I never finished the drawing. In fact, I never worked in walrus ivory or fossil mammoth ivory again.

Life by the Skagit River

Although it was a hand to mouth life while I was doing this work, it had many benefits. We were living in Rockport, Washington state, a tiny village of 150. It is beside the Skagit River where a population of Alaskan bald eagles winter over. Anyone who has heard bald eagles calling knows how haunting and musical their flute-like cry sounds. Rockport is two miles south of and one mile below the top of nearby Sauk Mountain. If you have never lived for an extended time in a remote location, then you can’t understand the oceanic calm that becomes a normal part of everyday life. Visiting Seattle for supplies or family was like driving into and becoming part of a huge generator. Driving up the Skagit Valley on the way home was driving into layer after layer of quiet and calm.
Finally, this 1984 Walrus Ivory Sculpture was sculpted from walrus ivory which Inuit (eskimo) hunters harvested the tusk as part of their aboriginal rights. The tusk was sold to the US government which sold it legally at an auction.